A brief history of sampling in music 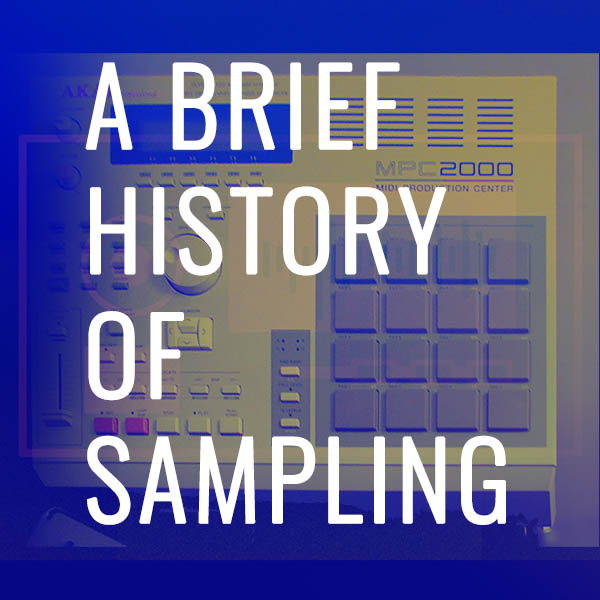 Sampling is something we’ve all heard of, a lot of us know what it is and sample things in our own music all the time. But where did it start, when did it start and who did it start with?

The definition of sampling

It’s a widely accepted view that hip-hop was responsible for the creation of sampling. There were early examples of sampling being birthed in the early 70s at hip-hop parties in the Bronx, where DJs like Kool Herc would spin funk and soul records, while MCs rapped over sections of these records live.

This in essence is sampling; using portions of the existing funk recordings to create new sound recordings.

This type of live composition/sampling went on for many years until 1979 when the first hip-hop records were released. With Fatback Band's "King Tim III", Younger Generation's "We Rap More Mellow", and The Sugarhill Gang's "Rapper's Delight" all coming out in ’79.

Arguably the mindset of sampling began several hundred year's back in the orchestration of composers like Beethoven and Stravinsky, resetting sounds from earlier eras amongst new instrumentation and more modern textures.

Back to the 80s however, hip-hop birthed a plethora of noteworthy sampled based compositions while mostly flying under the nose of the billboard hot 100.

Although, the dawn of the decade saw the rise of ‘Rappers Delight’, the first classified hip-hop single to grace the billboard top 40. Sampling Chic’s ‘Good times’, ‘Rappers Delight’ is a perfect example of sampling done fantastically, taking an existing composition and reusing elements of it to create something new and fresh.

The rest of the 80s was incredible for hip-hop and sample based music, with the emergence of Public Enemy, De La Soul, N.W.A. and the Beastie boys.

The Beastie boys would quickly abandon their punk roots in favour of hip-hop and rap rock, choosing to use samples instead of traditional instruments. Their album ‘Paul’s boutique’ is heralded as a masterpiece in sampling consisting of anywhere between 100 and 300 samples.

It’s a relic made in what’s known as ‘the golden age of sampling’ before stricter copyright laws were enforced, released amongst other masterpieces: De La Soul’s ‘3 feet high and rising’ and A Tribe Called Quest’s ‘Low end theory’.

From the UK scene...

And outside of the well-documented relationship American hip-hop had with sampling, across the Atlantic Ocean we saw British acts like Pop Will Eat Itself (PWEI), Cold Cut and The Art of Noise climbing the UK charts, in the late 80s with sample-based Rock, pop and Dance music. PWEI having their biggest success in 1992 with ‘Get The Girl! Kill The Baddies!’ peaking at number 9 in the UK singles chart. Coldcut‘s 1988 ‘Doctorin' the House’ peaked at number 6 in the UK singles chart. The Art of Noise’s 1983 single ‘Beatbox’ found success in the US Urban and Alternative dance charts, becoming a favourite for body-poppers.

All of these UK acts are considered pioneers of sampling in the UK and went onto influence lots of music after their time. Check out the breadth and depth of samples used in ‘Doctorin’ the House’ here, The Art of Noise’s ‘Beatbox’ here and another song by PWEI here.

As technology developed and musical equipment became more sophisticated, sampling and music production evolved. Producers moved from the SP 1200 to the Akai MPC and beyond. Moving away from sampling 2-4 bar loops from funk songs by the likes of James Brown, to sampling individual parts from various songs.

An example of this evolution coming full circle is Lord Finesse’s 1995 single ‘Hip 2 Da Game’, as he samples adlibs from James Brown, drums from Detroit Emeralds, melody and harmonic parts from Oscar Peterson and percussion from Milly & Silly. An eclectic and selective mix of sample sources, being sophisticatedly combined and repurposed in a well-produced hip-hop song.

Two other examples of sampling’s evolution rest in The Avalanches album ‘Since I Left You’ [2001] and Dj Shadows album ‘Entroducing’ [1996].

The two albums are examples of sampling taken to the extreme, as both of them are made purely from samples, showing us the capabilities of sampling are endless.

This technological evolution continued into what we have today, and sampling abilities improved. The possibility of using samples for almost any sound in a track became a reality, emulating realistic drums and orchestral instruments for instance. This was perhaps the ultimate evolution of the art form, to eventually merge seamlessly with a track, to the point of imperception. At that point it became impossible to tell a sample apart from a musical part recorded for the actual song.

These days sampling’s possibilities are truly limitless and anyone with a DAW can edit, stretch and manipulate samples in their own songs. To this day electronic music is still intertwined with sampling, as it traversed out of hip-hop and began to influence other genres like House, Jungle, Drum & Bass, UK Garage and Pop music; becoming part of its DNA.

The work of hip-hop producers like J Dilla and Nujabes would inspire the likes of the Neptunes, Kanye West and Timbaland. They would then come to define the production sound of hip-hop and R&B through the late 90s into the 2000s. These producers in turn would go onto inspire artists like Flume and Charlie Puth that would help define the sound of pop music today.