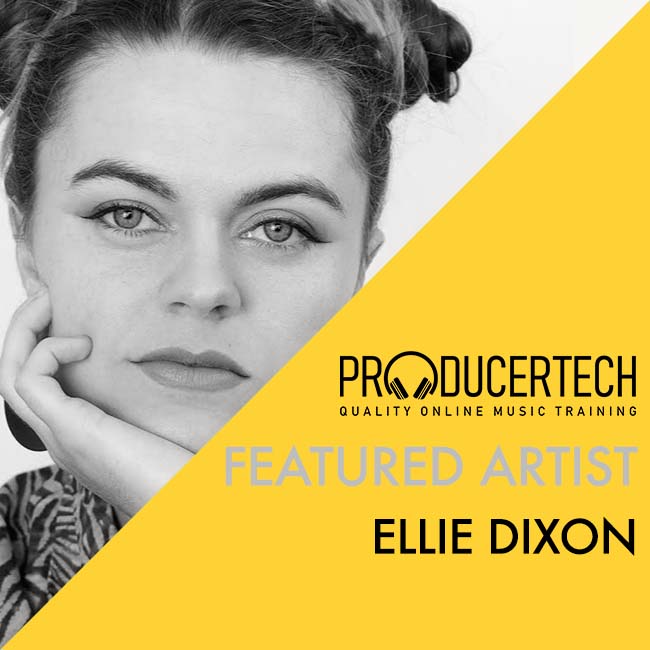 In a difficult year for musicians, a generation of young artists are using TikTok to launch their careers. One such artist is Ellie Dixon, a singer, songwriter and producer from Cambridge.

We’re pleased to welcome her to the Producertech family and we’d like to introduce Ellie as our latest Featured Artist...

Ellie is an exciting young talent who has gone from bedroom to Radio 1 in a remarkably short time. At the time of writing (June 2021) she’s about to hit the 400k followers mark on TikTok, where she creates engaging musical content showcasing her talent for innovative production.

Labelled as an "indie pop wunderkind" by Avro Telvanni, Cambridge-born 22 year old Ellie Dixon creates self-produced, punchy bops with groove and a sense of humour. Producing from her bedroom studio, she has created her own brand of self-aware alt-pop described by She Wolf as "pop music with brains". Dixon fuses her bespoke blend of indie pop, rap, jazz and R&B as she expresses life lessons and frustrations through witty lyrics and ear worm melodies. Influences include; Easy Life, Still Woozy, BENEE and Anderson .Paak while oozing with her own personality, creativity and a love for the unconventional. Both her musical versatility and self-made, joyous visuals have been catching the ears and eyes of many, landing her Spotify editorial play-listing, radio play on BBC Radio 1 and BBC 6 Music, and backing from CD Baby.

With a palpable buzz surrounding her in 2021, you're going to be hearing a lot more about Ellie in the future.

Let’s check out some of Ellie’s tracks, most of which she self-releases and distributes through CD Baby.

Spaced Out is a floaty, incredibly catchy Indie Pop tune. The lyrics and production, both by Ellie, really showcase her playful creativity as well as her technical expertise. The bouncy but never cheesy melody is a head-nodding joy. What is immediately apparent is how polished this tune is. This is not your average bedroom-produced track. The vocals are lifted in the mix, the bass is clean and the percussion crackles in the right way.

Sucker is, according to Ellie, “the creative climax of her lockdown”. The lyrics are clever and open to interpretation, recalling many of the themes we’ve all had to deal with over the past year. What really captivates our ears are the Prince-like guitar parts. There is a particularly effective moment where Ellie’s vocal melts into the guitar.

This is definitely an Indie Pop empowerment bop, as Ellie calls it. We love the production on this one. There is a real Anderson .Paak feel to the rhythm, the guitar and the harmonies and clever little effects recall the slick production in his music.

If you want to learn how to make catchy Indie Pop then Ellie’s forthcoming Producertech course is for you. She’s not just a great songwriter and producer but a fantastic tutor. A natural in front of the camera as well as behind a mixing desk, her course is a fresh perspective on production and songwriting technique.

We’re delighted to have her on board.