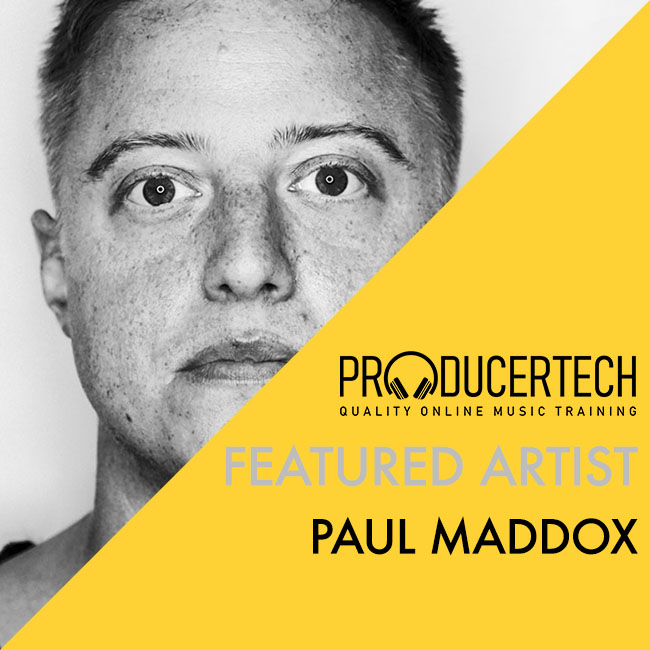 Paul Maddox is one of Producertech’s longest serving and prolific tutors.

He has an outstanding reputation as a teacher, proving popular with our users and to many he is a legend, particularly in the worlds of Hard Dance and Techno.

But how much do you really know about his music? Read on to find out more.

Paul Maddox, his Aliases and his music

Once known as “‘one of clubland’s hottest properties” Paul has dedicated his life to producing and djing music.

He was already making waves on the hard dance circuit aged just 16 and became a mainstay of illustrious hard house label Tidy Trax. He has since played over a decade of infamous Tidy Weekenders.

Paul found success early on in his career in 2003 with a remake/bootleg of N-Trance's Set You Free on Tidy Trax with a slew of other releases following on the label in the same year.

Here he is working under his alias ‘Azure’ remixing Dutch Trance master, Ferry Corsten’s anthemic Rock Your Body Rock which exposed him to a global audience also in 2003.

He has had many other aliases over the years, exploring different genres with an incredible amount of success and radio plays. Listen to our curated playlist of some of Paul’s tracks below.

Paul’s most recent success story comes in the form of Spektre. Spektre started life as an experimental side-project for members Paul Maddox and Rich Wakley. Now they are an established and highly respected act in the Techno world with a regular presence on Adam Beyer’s Drumcode label.

As performers, Spektre’s unique sound has taken them to some of the biggest and most highly regarded venues worldwide, with frequent bookings by the likes of Space Ibiza, Exit Festival, Pacha Buenos Aires and Burning Man. On stage, their long-standing chemistry and constant desire to experiment always results in an exciting spectacle. Their live exploits are also documented alongside guest slots from esteemed cohorts in their regular Mutual Respekt Podcast.

While Paul’s music was very much centred in Hard Dance and Trance, his newer productions and work as Spektre are rooted in modern, dance floor techno.

With the knowledge acquired over nearly 2 decades, Spektre’s productions are slick and efficient dancefloor bangers. There are trancey touches, epic moments that lead to wild euphoria on the dancefloor.

Take Gates Of Dawn, a heads down Techno stomper that has clocked up over 100k views on YouTube. It locks you in with a steady, tension building melody. The Saw wave used in the track will be familiar to Hard House fans as it moves across the tune before opening up to nasty, epic effect!

Planet Noir released on Noir Recordings also has Hard House and Trance elements. The stomping beats, a signature of Paul’s music, drives the track along combining with some great synth and string action.