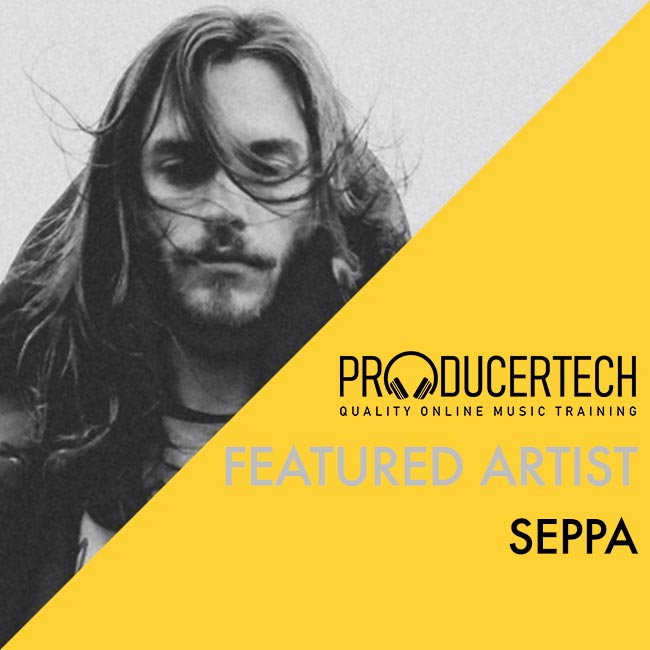 UK producer Seppa joined Producertech in 2017. He specialises in Bass music, crossing genres such as Dubstep and Drum and Bass. These genres are known for their innovative sound design and electrifying production and Seppa is a master of making stunning noises.

Seppa hails from Bristol in the South West of the UK. Bristol is a city known for its sound system culture, squat party movement and a musical heritage that really exploded in the 90’s with bands like Massive Attack and Portishead. It’s no wonder so many bass producers emerge from the city.

At the forefront of the new wave of Bristol Bass stands Seppa, a producer and DJ who has seen success not just in the UK and Europe but in the US too, where he has played shows alongside Kursa and Yheti.

His sound is perfectly suited to the mega rave, a prime example of this is recent release Yalla. Swirling FX and a warped sound vocal intermesh with more synthesised sounds. Percussive elements are teased and a horror movie style lead builds to an absolutely disgusting drop. This is nasty, full on and dancefloor ignitiing stuff, particularly when we hit the second drop which showcases Seppa's talent for keeping the track moving.

Seppa's journey started over a decade ago. Clearly influenced by the likes of Noisia, Reso, Rusko, Bad Company and Sub Focus, his talent for sound design first emerged through self released title Homunculous.

Listening to Lay It Out from the Homunculous EP, you can hear his innovative approach to warping and twisting samples, layering sounds and his super slick mix.

This carries through so much of his music. Rasping, tearing saw waves cut with things that sound strangely familiar but like they have been sent through a wormhole and reappeared as mutated beasts!

Listen to our specially curated playlist of tracks below.

Seppa has now become a mainstay of Slug Wife Records, as well as releasing on Automate and Wonk#ay Records. He himself often describes his music as “Slug” a not-so-gentle nod to the label he A&R’s for.

The label acts as a community of like-minded Bass musicians with the following ethos:

“It’s all about the music that makes your head bob and your giant, body-length foot convulse with pleasure. We are both a record label and a crew, designed to push our sound our own way without having to break the integrity of our artists’ work; we respect the fundamental role artists play in the world of music, and strongly believe each one should be treated as a unique entity. By allowing producers/musicians to retain full creative freedom, we aim to continuously break boundaries in music production and encourage more to follow suit.”

As well as being a successful producer, Seppa has been teaching. He has several Producertech courses on this very website as well as hosting interactive livestreams for our Producertech Members. You can check out some of these courses below in the related courses section.