The Evolution of producing with Maschine

Much like Reason, which began life as a quirky MIDI sequencer and ended up as a fully-fledged DAW, Maschine started out in a substantially different form to the software/hardware combo device it is today. Each part of the software has undergone continual improvements, but the arrangement area in particular has gone from the simplest block builder to a timeline with almost all the editing flexibility and automation capabilities you’d expect from a modern sequencer.

When I first got hold of Maschine, I assumed it was basically a tool for creating beats, mostly because it was heavily inspired by the classic AKAI MPC drum machine range. I was obviously not disappointed when it came to that side of things, but I was initially impressed by how easy and fun it was to compose and perform melodies using the pads. Playing an arp pattern or chords sequence with the pads in keyboard mode for instance, made it possible to put together jams like the one embedded below:

As well as featuring a number of modes for playing sounds however, the pads could also be used in Scenes mode to switch between different parts of an arrangement, either instantaneously or after a certain amount of time, opening up all sorts of possibilities when it came to performance. If attempting to produce a track entirely with Maschine however, there were quite a few limitations that made it tricky to make it all the way to the end of the process, so there was inevitably a point at which a DAW would be required to finish things off.

Here’s a quick outline of the changes to the arrangement area, to demonstrate just how much it’s evolved and explain the difference this makes when producing with it.

The original arrangement section had just one basic mode. It contained a timeline much like in any other DAW, into which patterns could be placed. Each horizontal segment along the timeline, containing a combination of patterns, was called a Scene. Scenes could be duplicated to create certain parts of a track, e.g. a 4-bar Scene (containing patterns up to 4 bars long) could be repeated 4 times to make a 16-bar breakdown or drop. In essence, this was a recreation of the kind of arrangers you’d get on the old hardware Maschine was inspired by.

There were several major limitations with this system. The first was that, although duplicating Scenes made it pretty quick to create longer segments of a track, editing one part of that segment, like creating a fill with the drums at the end say, was more complicated. The reason for this was that when you duplicated a Scene, you ended up having the exact same patterns existing in multiple parts of your arrangement. That meant that when you edited one pattern, you changed them all. The way around this was to duplicate patterns in Scenes to make them unique and this eventually became a control in the software, literally a ‘unique’ button that you could press to save you having to duplicate patterns yourself. So there were ways round the issue but things always got a bit fiddly!

Another issue was that Scene durations were governed by pattern length, so couldn’t be configured separately, and they were also very much distinct segments adding up to a ‘blocky’ arrangement, so creating a smooth transition from one part to the next, with sounds and automation occurring over the transitions for example, wasn’t that easy to do.

Maschine version 2 saw the introduction of Sections. These were separate entities from Scenes, and could be added to the arrangement, then set up manually by adding Scenes for instance. This offered a lot more freedom for building parts of a track, particularly as Section lengths could be set independently, rather than controlled purely by pattern lengths, and could also be empty if required.

With Scenes and Sections being their own thing, this quickly paved the way for 2 arrangement modes. The original mode became Song mode, whilst the new Ideas mode was something more akin to session view in Ableton Live, where patterns could be tried out in different combinations and looped indefinitely, rather than starting and stopping according to where they lie along a timeline. Much like in Ableton Live, Ideas mode is, as the name suggests, the better option for coming up with ideas and starting to build sections of your track, before then transferring those ideas over the timeline in song mode. Ideas mode is where you build Scenes, Song mode is where those Scenes are placed into Sections along the timeline.

Here’s a video I made back in 2017 explaining Ideas mode when it first came out:

The next and perhaps most significant change came at the end of last year in the version 2.12 update. This saw the introduction of Clips. Clips are a huge addition to Song mode! They are essentially like patterns purely for the arrangement, and can be created totally independently of Scenes or even Sections, and so added ‘willy nilly’ to the timeline. This completely solves any of the problems that a system based purely on patterns had, meaning that creating a quick fill or seamless transition is now easier than ever!

Once a Scene has been added to the arrangement, the patterns in it can be converted into clips with a single button press. Furthermore, when clips are copied freely to any other parts of the arrangement they are independent from one another or unique as default, much like in any DAW. Total game changer! Multiple clips can also be displayed and edited in the pattern editor, so you can make changes to your whole arrangement for a particular sound without having to switch from one section to the next in a different part of the software.

To learn more about Clips, any Producertech Members can watch my livestream on 27th May at 17.00 BST. All livestreams are also available after the event in the Members Area. Any non-Members can sign up for the free 14-day trial to access all courses, livestreams and other member content. 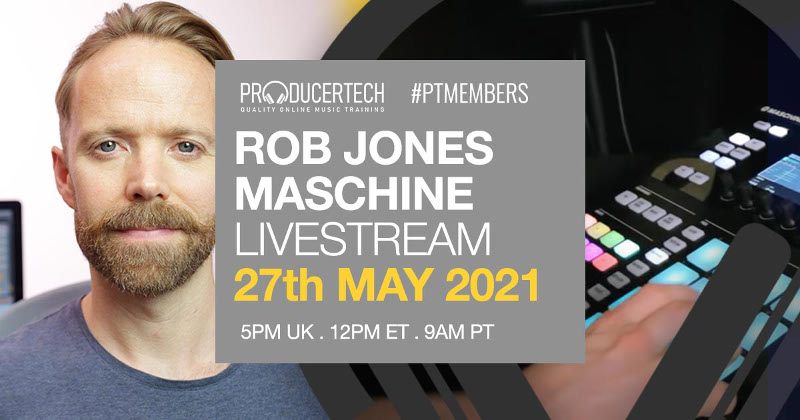 Can you produce music purely with Maschine in standalone?

The answer is now a definitive yes. It was possible up to this point, and even in version 1 in a basic way, but the fact that you now have flexible clip creation in song mode, allowing events and automation to be recorded freely to any part of the arrangement, makes the task of producing a completed arrangement entirely within Maschine an absolute reality. There are some small limitations when it comes to automation still, with curves being ultimately governed by steps (albeit incredibly small ones if necessary) rather than smooth lines, and working with audio is only possible via the sampler and audio devices, so all done through MIDI, but the workarounds are now small enough to keep you working in Maschine for a lot longer.

There’s something about the balance you get with Maschine, and also the seamless integration with the software. Yes, there are less pads than on some other controllers, but this makes them easier to play. The screens are also just the right size for displaying the software, and look identical to it, with one screen often having a zoomed in view, so you can simultaneously view events from two different perspectives when editing.

Mixing with Maschine is also a lot of fun. You’re limited to encoders rather than faders when adjusting levels on the hardware, with the SHIFT button offering fine adjust, and there aren’t any spectral analysers for displaying frequencies as yet, but you can get the bulk done relying on your ears alone. The range of effects that come as standard is certainly sufficient for getting a decent enough sounding mix, and you can of course import any of your 3rd party plugs into projects too.

So, producing with Maschine is now better than ever, but there are also extensive options for exporting or routing sounds out of the software. This means that, however you want to work, be it creating patterns only and then importing them into the DAW as you go, or laying out the whole track and then exporting stems, or even keeping all the sounds in Maschine but routing them out onto seperate tracks in the DAW, it’s all possible. So with usability, flexibility and sound quality all scoring so highly now, Maschine definitely remains one of my top recommendations for studio kit in 2021.