What is a plugin in music? 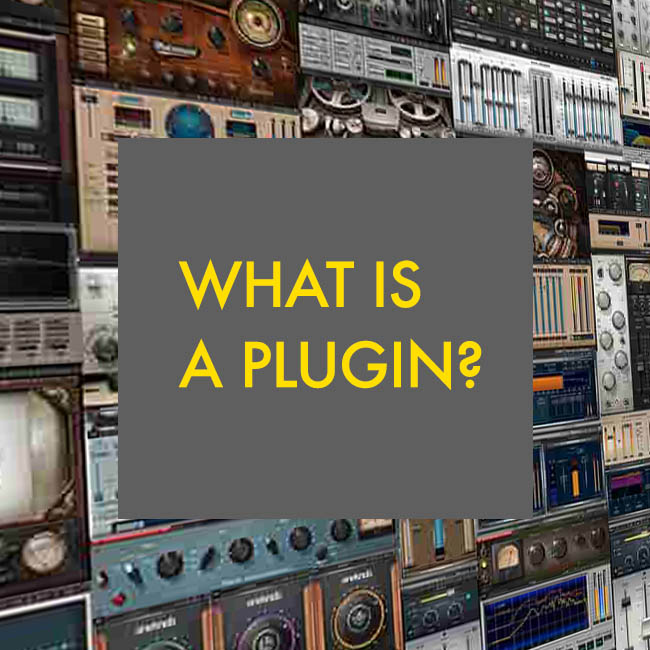 In very basic terms a plugin is defined as a self-contained piece of code that can be plugged into your digital audio workstation (DAW) to add enhancements.

Plugins tend to fall into the categories of audio signal processing, analysis, or sound synthesis. They can be an instrument, an fx unit, a tool, pretty much anything. Usually you’ll be presented with a nice looking UI mimicking how it might look if it were a real life piece of equipment.

Although most have their own distinct UI’s, Digital Audio Workstations (DAW”s) also have a more uniform way of presenting them (Ableton’s is simple and fits with its own UI). You can then more easily understand what each knob and slider does. DAW’s like Ableton Live and Logic Pro come with their own set of ‘out-the-box’ tools. When you start making tracks there’s a strong chance you’ll just be using what’s provided.

How does it work?

Your plugin will usually either be a VST or an AU, but what are those?

What is an Audio Unit (AU)

Wikipedia defines an audio unit as the following: Audio Units (AU) are a system-level plug-in architecture provided by Core Audio in Apple's macOS and iOS operating systems. Audio Units are a set of application programming interface (API) services provided by the operating system to generate, process, receive, or otherwise manipulate streams of audio in near-real-time with minimal latency. It may be thought of as Apple's architectural equivalent to another popular plug-in format, Steinberg's Virtual Studio Technology (VST).

AU’s and VST’s are essentially 2 versions of the same thing. You’ll find most plugins are available as AU, VST, or both. DAW’s on Mac usually support both but AU’s won’t work on PC’s.

Where do I get good plugins?

The best source of plugins online is Plugin Boutique https://www.pluginboutique.com/. You’ll find one of the biggest online libraries of software instruments and FX units on their website. Big name developers like iZotope, Arturia, and Fabfilter sit alongside one-man-band indie’s. You’ll also find a host of free tools strewn across the web. We’ve picked 5 of the best.

The difference between software & hardware

This is an age old debate. Since software instruments and FX units began to appear, the debate over what sounds better, the hardware or the software, has raged on. Purists argue that software will never beat hardware. Many people talk about analogue warmth, something that comes from the hardwares electronics.

In 2021, technology has moved on so much that it really is becoming harder and harder to tell. Processing power from monster home computers and monster sound cards means the bedroom producer can achieve a professional sound with just a copy of Logic or Ableton and not much else.

How many plugins should you use

With the above in mind, we recommend starting with the basics. Learn your DAW’s plugins first. It is possible to get tracks sounding really great without downloading all of the latest compressors and EQ’s. Many of Logic’s EQ’s already sound great so why would you start off by downloading Waves?

Most producers will get to the point where they have a seemingly endless folder of plugins before settling on a few tried and tested but it happens over time. Our tip, don’t get bogged down. Master one or 2 synths, your DAW”s samplers, EQ’s and FX units then delve a bit deeper when you feel ready.

Further reading from producertech (for beginners):

How to Become a Music Producer