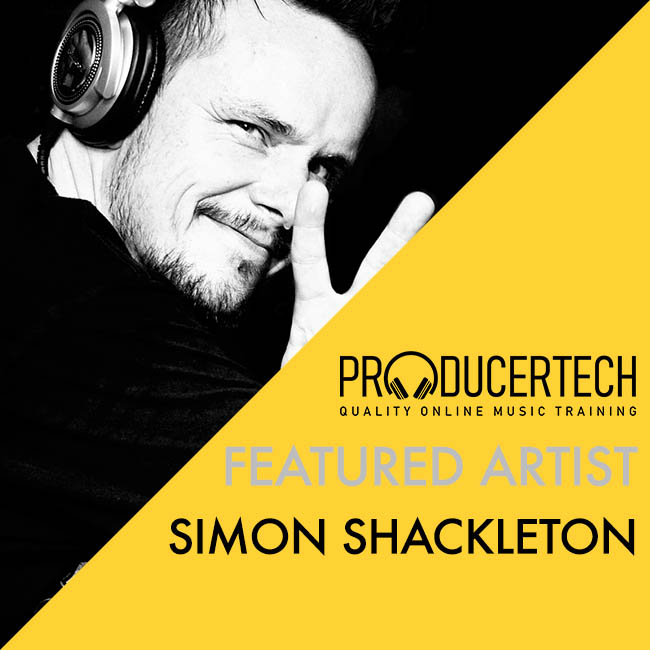 Becoming a Producertech tutor back in 2014, Simon Shackleton is responsible for some of our most in-depth courses.

As masterclasses go, his Melodic Deep Tech House and Techno series of online courses takes some beating. Beyond the genres featured in its title, this series is a complete guide to every aspect of the electronic music production process, from start to finish.

With a background like his, it’s no wonder his teaching style is the way it is. Comprehensive and with incredible wisdom, Simon draws on a lifetime of musical knowledge.

Listen to some of his music in our specially compiled Spotify playlist.

Simon Shackleton has an illustrious history in the music industry dating back 25 years when he left Exeter University with a Masters Degree in classical composition. He has played and recorded in bands such as The Headless Chickens with the likes of Thom Yorke (Radiohead), and got his start as a DJ alongside Felix Buxton (Basement Jaxx) during the early ‘90s acid house revolution. Since then he’s enjoyed a successful career under a number of guises including Elite Force, Lunatic Calm and Zodiac Cartel, winning several prestigious awards along the way, most notably for his Revamped Series. His music has been featured in over 40 movies (including the original Matrix), dozens of TV shows and adverts, and a plethora of game soundtracks including Shockwave, which he co-wrote with the likes of multiple Oscar-winner Klaus Badelt (Pirates of the Caribbean). View more on Resident Advisor

In 1996 he formed the electronic dance group ‘Lunatic Calm’ alongside Howard 'Howie' Saunders. The group specialised in a Big Beat/Hardcore sound similar to the Chemical Brothers and Leftfield but with a more industrial edge. They released 2 albums but are best known for the track ‘Leave You Far Behind’ which famously featured in The Matrix as well as several other films.

For many, Simon’s best known and best loved solo alias is Elite Force. In the late 90’s and early 2000’s he was a regular at clubs all over the world, championing a Breaks sound that once dominated the underground music scene.

Often referred to as a pioneer of ‘tech funk’ alongside the likes of Meat Katie and Lee Coombs, his work as Elite Force often skewed the boundaries between Techno, Tech-House and Breaks, which really helped his music crossover. A fantastic example of this crossover appeal is his track ‘Peyote Road’. The track was featured in James Zabiela’s groundbreaking 2004 mix CD ‘Alive’ for Renaissance.

Simon has made several online courses for Producertech as well as hosting live streams for our members.

Secrets of the Mashup

Throughout the course, the methods Elite Force utilises are dissected so you can understand not just how he works, but also the 'why?', which is fundamental to his ability to put together such vibrant and memorable mixes. By the end of the course you will have learnt how one of the most respected producers around uses these methods, as he imparts information to you in his clear and concise manner alongside real time demonstrations of these sophisticated techniques.

In the first part, Simon provides a thorough guide to the creation of every part in the track, from drums, bass and leads, to vocals, pads and FX. An assortment of Loopmasters samples are used for the job, carefully sculpted and layered together, with occasional synths employed for melodic parts. Part 2 then continues the journey, with a detailed look at working the parts into a full-on organic arrangement, which is mixed down in part 3.

For budding producers looking for tried and tested advice on building a track from scratch, Simon’s courses are for you.

They are meticulous, covering pretty much everything you need to know about making a record that works. Advanced musicians will also find his experience and workflow tips helpful, making these courses very rewatchable.

If you want to find out more about Simon from the source, visit his website.