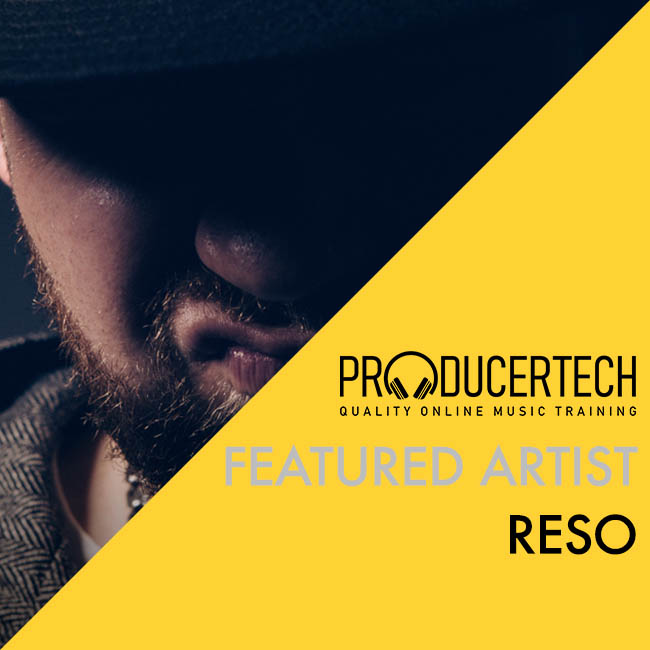 Drum and Bass, Dubstep and Bass heavyweight Reso is one of Producertech’s most consistently excellent tutors. An expert in sound design and sci-fi club sounds, his online courses are aimed at more advanced Logic Pro users and Bass Music fan’s alike.

Listen to our Spotify playlist of Reso's music below.

Reso is simultaneously moving a whole spectrum of electronic genres forward while further cementing his place as the overlord of hi-tech dubstep. With Reso wobble, hypercrunk, breaks, wonky, hip-hop and D n B all receive the treatment. Reso’s deep musicality, incredible skill, intricate programming and wildly diverse references place him at the peak of a new breed of electronic producers.

Reso has spent years dedicated to making Dubstep and Drum and Bass music. He's collaborated with the likes of Rusko and Ruckspin and released on labels like Z-Audio, Slugwife, Civil Music, Hospital Records, and Ranking Records to name a few.

As a drummer, the drum programming always stands out in his tracks. Vibrant hats and intricate percussion sequences are often a feature as is his use of breaks alongside a rip-roaring bass line. He often employs a half step beat sequence style, where the drums are programmed in half-time.

This can be heard to full effect in Technetium.

When producing DnB, Reso has a much more silky smooth aproach.

Futuristic synths are combined with the brilliance of his drum programming. This style allows him to apply more of his musicality to slick production, a combination that fits perfectly with Hospital Record's well established style.

Below is a list of Reso's online courses to date (2021). As well as what you see on this page, he has also started hosting live streams for our members. You can take part in his first interactive stream on the 23rd February. Become a member to get access.

Pro DnB Tips & Tricks - The Making of 'Move It'

Hospital Records artist Reso opens his studio doors to share the pro DnB techniques involved in producing his chart-topping anthem 'Move It'. Follow through the tutorials as he meticulously deconstructs the drums, bass, melodic and vocal parts, as well explaining the mixing and mastering of the track.

In this course Reso shows you how to create a complex, jungle inspired Drum & Bass beat, using only Logic’s stock instruments and effects. Starting with the kick and snare, he then adds layers of shimmering hats, shakers and percussion, explaining in detail his choice of samples. He also shares his programming methods, crucial to keeping the beat sounding live and vibrant. After programming the rhythms, he then guides you through his processing techniques, giving an insight into his choice of effects, as well as mix bussing, with tools such as parallel compression and stereo EQ’d reverb returns employed to gel the beat together.

The first few tutorials in this online course focus on designing bass patches, where Reso uses Alchemy and EXS24 to create a number of gnarly sounds, featuring different sonic textures and LFO-driven movement. The presets are then drawn and played into the timeline to create an exciting 32-bar phrase, with call and response and automation employed to ensure dancefloor satisfaction. The remainder of the course then shows how to process the basses via different buss channels to get the mix sounding chunky but clear, with both drums and bass finding their own unique space.

This course begins with a wealth of tips for how to build the foundations of an intro and breakdown, using mostly existing drums and bass elements from the drop, edited and processed in various ways. Reso then provides a detailed guide to creating, sequencing and processing different melodic phrases and FX, in order to produce a harmonious progression that develops musical themes whilst adding the necessary suspense and growing tension. As well as learning an abundance of sound design, mixing and arranging techniques, entirely with Logic’s instruments and effects, Reso even imparts his process for setting up the master bus, to create a mix-ready track for playing out.

The entire trilogy of in-depth DnB masterclasses collected into one epic bundle.